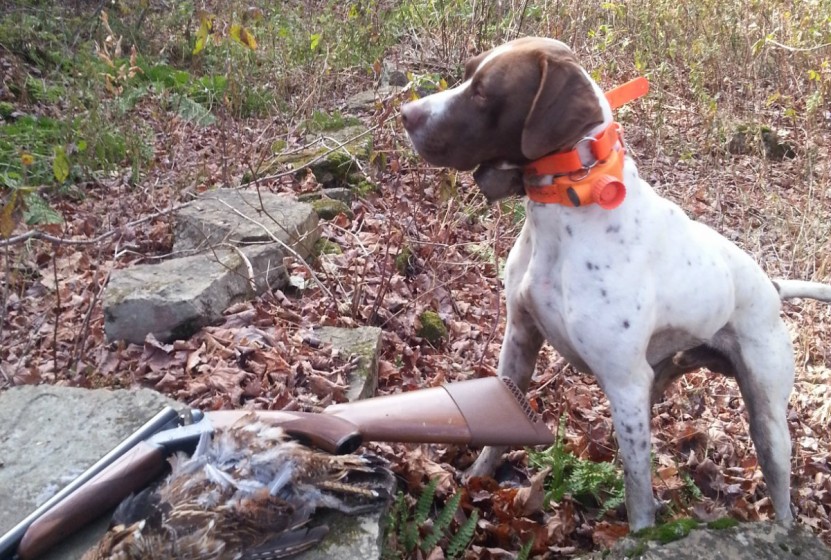 Whispering Hills cut into lines and boundaries to mark where a pasture starts and a Fire wood lot ends.   Chimney stacks roll a steady stream of smoke to fill the Autumn Air with the Aroma of Hickory and Oak to fill your nostrils with thoughts of warmth and comfort.   Strands of Barbed wire lay out to separate one neighbor’s property line to another without question as it has been written for generations.   Grey Cobble stacked to 3 foot high line the property as memories of old lay in linear elegance up, down, and across the hill sides.   The reminisce of the hills lay in those walls as they have seen wars fought,  love begotten, hunters cross, and  home to the North Eastern Ruffed Grouse. 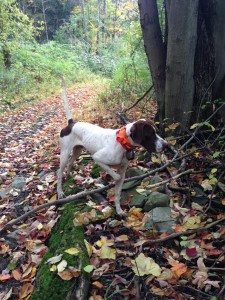 Fatso Hunting a Stone wall on a Logging Trail

I have spent a lifetime in pursuit of the King of Game Birds, and have always learned that Grouse have a way of finding their Home in spots which give them the vantage points to seek a mate or to easily flee as predators approach.   Large logs are a typical choice in the spring for a Male Ruffy to set up shop in search of a mate.  It is the Stone Wall of my beloved hills of Central New York where I have found that sanctuary , which my mind wanders off to in search of a dream of my Pointer locked frozen, heaving and quivering….paw raised in careful anticipation of dropping it down for the strike.

It doesn’t take much for me to get there mentally as I have spent many wondrous hours zig zagging up hills in into old orchards where if you listen close you can hear the beat of the wing.   Sprawling gentle hills line the Butternut Valley system as I can see the breaks and turns of what is Conifer transitioning into a hardwood stand.   Aligned with these transitions is the ridged line of stone wall which continues across the bottle neck on the Southern end of the meadow.  This is the spot where I have always found Ruffed Grouse to be after a morning meal and moving into their place of rest. 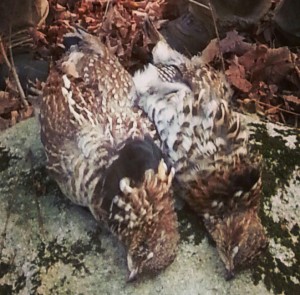 2 Beautiful Ruffed Grouse on a Stone

My dog has had his burst of steam knocked out of him in the meadows leading up to this hill as I can see the steam roll off his wet coat as the late morning dew covers him.   This always insured him to be a bit calmer in staying close for that first bird.   I approach a wild rose thicket at the base of this hill knowing that once I pass it I would find the small dips and peaks where our winged buddy likes to spend his days.   Speckles of red sway with the breeze on that hillside as the berry bushes are like a sea leading me to the home of the big bird that I seek.   My dog freezes holding his head high and tail at 11 o’clock.    Breaks Point again, slowly creeping and setting momentarily as he makes his way towards a break in a stone wall at the peak of this dip.   Takes 3 steps and freezes again.   I move forward slowly and deliberate as I play this out in my head ready for the explosion and glance from left to right.   I am now in front of the dog as he is still staunch and steady.   “There has to be a bird here”, I thought to myself as I place one foot in front of the other.   I am passed the break in the stone wall now as I find my way onto an old logging road along the stone wall.   The dog has not moved as I signal him to break point after finding nothing.    He will not move and I knew at that point that there was in fact a bird at the base of this wall somewhere!   I turn and start moving behind where I was facing and out came a pile of dead leaves and the most beautiful Red phase bird straight up the logging road in the clear.   I threw my Double up and managed to knock the bird down.   That never gets old….That feeling of WOW as I move towards the area where the bird went down.   I guess I was so enthralled into that harvest I forgot to load up again, which rarely ever happens.   As I approached, off goes another and another all from the stone wall!  I remained frozen as I still didn’t LOAD MY GUN in SHOCK!   The dog was going nuts as he smelled the down bird and seeing those birds take off…he ran after them as they fled.   I got him back to the spot as I wanted this young pup to locate and retrieve the bird and off in the distance on that logging trail/stone wall, goes another on his way down toward me and the down bird…Out of range.

I cannot tell you or begin to imagine how privileged we in the Northeast are to be able to see these beautiful lines of stone stacked by hand by those who came before us.   As a Grouser and lover of all things upland, I hold them sacred as they outwardly decorate my autumn and conceal the bird I love best in hopes that the only thing between us is a stack of stone and the swing of a dream.