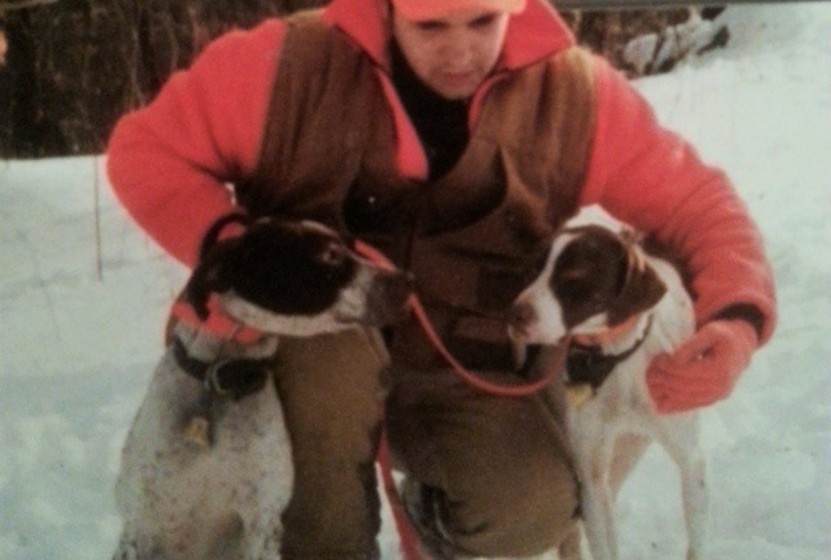 With all the mist and haze…I’m starting to come out of a fog.    I see the sun bursting through the trees and in my eyes as the deep reds of the autumn leaves interject and find their way to guide the sun’s rays to me.    I can smell the aroma of decay as falls onslaught is becoming apparent by the second up here.  In front of me I see flashes of White and Liver weaving through the thicket as a morning in the Grouse woods awakens me out of a concrete daze and delivered me from the metal maze. 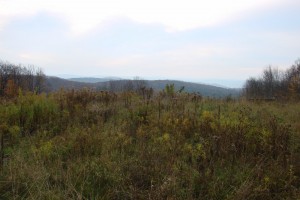 It is a fine morning to stand perfectly still and listen to the echoes of silence and I am free from the shackles of Gotham once again and in the place which ignites the tinder of my heart.   I’m ascending up King Settlement Hill from the small creek at the foot of a hardwood ridge which can be visibly seen from the road.   Bottle Necks and transitions spread throughout this hill as each plateau greets the next. I always climb directly from the left as any other way would push the birds up the hill and into a larger track of land from where they just seem to disappear.   I learned this the hard way as I used to zig zag up the hill to the crest pushing all the birds out of sight.   Some call these trials and tribulations errors….I call them self-inflicted improvement!

By now you should understand that flanking up the far side of the hill to the top will allow me to descend down the hill working each ledge from left to right and from right to left. This gives me a vantage point from above the flush and limits the flight of the bird to a far lesser tract of cover to fly into. We called it pinning the bird.  354 acres of southerly exposed hillside loaded with the king of gamebirds was my playground for some time.

Drafts and small gusts push the morning fog forming from the creek bottom and finding its way up the ridge to blanket  all of the vegetation as well as the dog as steam rolls off his coat.    Perfect harmony as the scent of his first bird crosses by him at the edge of the first break.   Ace’s head is facing far right as his body contorts frozen at first scent.   I can see his ribs heave as he takes in every breath with vigor and intensity.   I pick my open spot as I know that bird is at the edge of that small Alder lot and fly across me or down the hill.   Ace breaks point as his ears were perked which could only mean he had a visual that I didn’t have….I tried to hold him back as he carefully unfolds from his bent demeanor.   I carefully take my first step since his set and go to take another and 1 bird flushes from my right and I shoot and drop him. 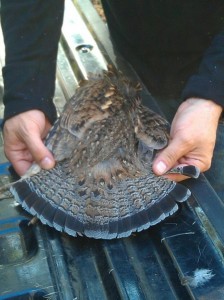 The dog quickly stretches into a quick setter like creep, as I marked the down bird quickly to get back on what the dog was on.   I channeled my vision ahead of the dog, to the sides of the dog and way up ahead of him and nothing.   Where could this bird be?   Ace locks into a low stretch with his tail low and straight as if he was ready to pounce and remains there for a solid 3 or 4 minutes.  I didn’t dare make a move as I wanted him to sort it out , but I can see his eyes trying to bring me into the picture which meant…WHAT ARE YOU WAITING FOR!    So I move straight down to his side as he began to creep along side of me and….. Another bird flies off a limb of a lonely pine on this vast Hardwood ridge.  Birds were flying out of every corner except where ever Ace was trying to follow as we covered half the hill and he is still creeping.   You can never doubt a dog’s nose but I’ve seen this before…Unproductive points on hot scent and that is what it had to be as I have one bird laying up the hill next to a dogwood and a pine flush which almost could have been a kill.    Still he was intent on keeping this going.   I said “Whoa” and he stopped just turning his head ever so cautiously as he somehow knew I was going to head back up to the down bird but wanted to see if he stopped.    So I turned and walked up the hill towards the down bird and occasionally looking back over my shoulder to where Ace my 4 year old English Pointer was still locked solid.  Was he being stubborn?  Trying to give me a message of sorts and not moving to show me that he wasn’t wrong.   I began to look through the cover and where I thought the bird was and my inner voice told me to rush back down to the dog.  I walked a few steps and looked through the stand and he had not moved an inch.   The suspense was killing me as this process had been going on for far too long.   I cautiously moved down the hill at almost a normal pace as Ace stretched as a lion hunting the Serengeti for a wildebeest.  I did not realize how far down we really were as we were approaching the end of the last bottle of cover and with a burst……2 Grouse flew right at my head as if they were Kamikaze fighters not giving me enough time to even pick up my gun and shoulder it.  I had to almost duck as they flew low even clearly seeing the underbelly of one of them as I followed it over me seeing that glorious fan as I regained my composure looking back over my shoulder as it flew away.

This day was as perfect as they could make it.   Success rates only calculate what is in the bag but they do not account for a lifetime of memories.   Moments in time that even a Grouse flying straight at your face as you  and your Pointer pushed and pinned it to its last inch of cover.   Life’s lesson from a Gun smoke English Pointer named ACE who died shortly after that memorable day from cancer at the age of 4.   It was in that downward creep that he taught me a lesson in always trusting the dogs nose as they are your weapon in having a Grouse Attack.