There are a whole slew of guns that are considered “Grouse Guns” by  the Grouse hunting purists.   Parker, Fox, LC Smith, Lefever and the Classic Ithaca are a few of the classics that are considered Americana.   With that said, I have many of them myself and cherish every one of them as if they were gold.   Their history tells a story of days gone by and the humble days of a time that most Upland Enthusiasts wish they could have been part of.   Guns made to hunt tight covers and barreled for confined coverts allowing you to quickly swing on a departing flush.

The balance on those older time pieces were of the same make up and for reasons unknown were not duplicated in the same manor after the golden age of American gun making.   Enter the Ithaca SKB!  We should start by clearing one thing up…. it is….. ITHACA MADE BY SKB.     The make up of these guns were made solely by SKB in Japan and sold by Ithaca.    It was insinuated by some, that a product made in Japan would somehow be of lessor quality which is a fallacy considering SKB’s history and commitment to quality.

As stated on the SKB website , Shigyo SaKaBa was the lead gunsmith appointed to development of firearms to his Samurai Clan which were feuding with other clans through out the countryside.   They were renowned for the quality of their craftsmanship and sought after to produce top quality firearms for years following.   They began to produce shotguns to be sold in the U.S. in 1968 and continue to do so today.   They produced models for Ithaca from 1969 to 1978.   Models included 100, 150, 200, 200e, 280, 280e  and 400 in side by side. 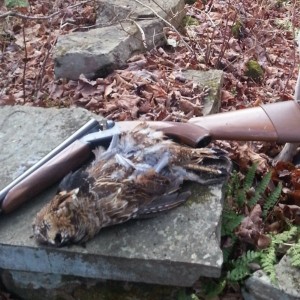 I personally have hunted with them since I was 15 years old and split my time in the woods with my model 100 and 200e.   I could not ask for a better swinging gun, which handles as sweet as can be.   These Grouse guns are tight at the close and shoot true.   Models tend to have 25″ and 26″ barrels which are Improved and Modified for the most part.   They are offered in a pistol grip in the 100,150 and 200e and the 280 tends to have an English stock.

The Price Points for these guns are very affordable and can be found at your local dealer or online for the approx average price of:

As you can see this is quite affordable for a gun that may have less years and wear as many of the “classics” have.  There are fewer of these Grouse guns in circulation as time moves further away from their peak production and sale.  Many hunters consider them as sought after as many of the others who we all consider classic bird guns.   I dubbed them the Modern Day Classic Double due to the higher demand I have witnessed in recent years and a higher level of appreciation for them by Upland Enthusiast alike.